More than a Mom: The Reality of Today’s Working Mother

You don’t need to be a mother to know that moms are capable of some pretty fantastic and seemingly unbelievable feats. Over the last century, a mother’s role of being designated to the home has evolved to incorporate working women into the world. “Working moms” have also become such a common idea in households across America that it’s almost assumed that if you’re a mother, you’re working as well. Everyone knows at least one working mother, but do you know just how many mothers juggle working and raising children simultaneously? According to the Department of Labor, in 2012 there were 31 million working mothers in the United States with children under the age of 18. That’s like if the entire population of Peru consisted of working moms! The increase of working mothers in America made a gradual but significant increase from 1975 and peaked around 2005. And while in 1960, only 11% of women were the sole breadwinners of the household, that number has rose to 40% in 2012. According to the Pew Research Center, when mom was the primary breadwinner of a two-parent household, the median annual household income was $80,000—which is actually $2,000 more than in households where dads were the primary breadwinner. That’s a pretty interesting statistic that goes against what may be assumed.

"The United States ranks last in government-supported time off for new parents, with no weeks of paid leave and 12 weeks of protected leave." Click to Tweet!

"Sons of working mothers spent more time helping with family and household chores than sons who had stay-at-home mothers. Another interesting finding is that men who grew up with working moms were more likely to seek and encourage a spouse who works as well. " Click to Tweet! 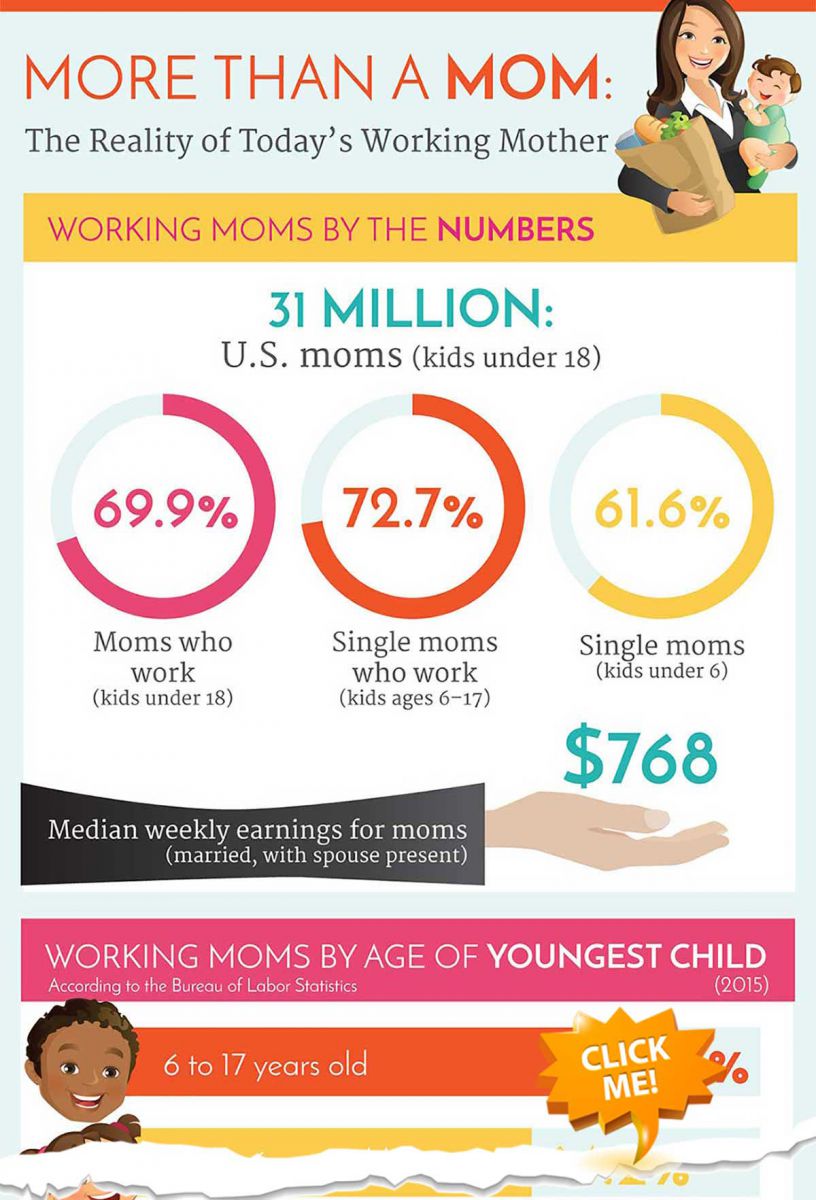 While there are some mothers who return to work because they wish to, this lack of government-supported family leave causes many mothers to return to work with a new baby at home. According to the Department of Labor’s data for 2013, 62% of mother’s who had a baby were back at work that year. Of the same group of new moms that year, only 30% had earned a bachelor’s degree or higher. Nearly a third had some college or an associate’s degree, and 38% had earned a high school diploma or less. Since the Bureau of Labor Statistics says that those who have earned a bachelor’s degree or higher (based on median earnings for full-time wage and salary workers not broken down by gender) may earn more per week than those with just a high school diploma, it seems as though working mothers new and old may want to consider enhancing their college education. Since there are 3.4 million mothers in college (according to the Institute for Women’s Policy Research), those mothers would be in good company!

"The Department of Labor states that the most popular job category for working moms is managerial or professional jobs. " Click to Tweet!

While it’s difficult to balance work and the responsibilities of raising children, there are some distinct potential benefits. There is, of course, the sense of accomplishment and satisfaction at providing for one’s family, despite the contentious fact that women are, on the whole, paid less than men in America. However, the idea that stay-at-home mothers turn out more productive, well-rounded children than working moms may be an outdated and, frankly, inaccurate idea. According to a study conducted by Harvard Business School, daughters of stay-at-home mothers earned 23% less than daughters of working moms. The study also found that globally, daughters of working mothers finished more years of education, were more likely to earn higher incomes, and were more likely to find employment in managerial positions. Considering that many working moms work in managerial positions, sounds like it’s a case of like mother, like daughter!

Meanwhile, the study showed that sons of working mothers spent more time helping with family and household chores than sons who had stay-at-home mothers. Another interesting finding is that men who grew up with working moms were more likely to seek and encourage a spouse who works as well.

The Future Trend of Working and Stay-at-Home Moms

There will never be an answer to debate on whether being a stay-at-home mother or a working mom is better for children, and there doesn’t need to be one. Some women choose to participate in the workforce and some work out of necessity. An interesting finding by the Pew Research Center is that after 10 years of an increase in working mothers, there seems to be a switch over to an increase in stay-at-home mothers. The researchers note that this may be due to the fact that would-be stay-at-home moms entered the workforce during the economic uncertainty that preceded and followed the Great Recession of 2007.

No matter how much the numbers of working mothers rise and fall, there will always be millions of working women who need to, but also want to, develop their careers while also raising children. The traditional nuclear family—stay-at-home mother, bread winning father, and two children—has become a relic of the past, and the idea of a “traditional” family is becoming more and more indefinable as the twenty-first century marches on.