The Psychology of Lying 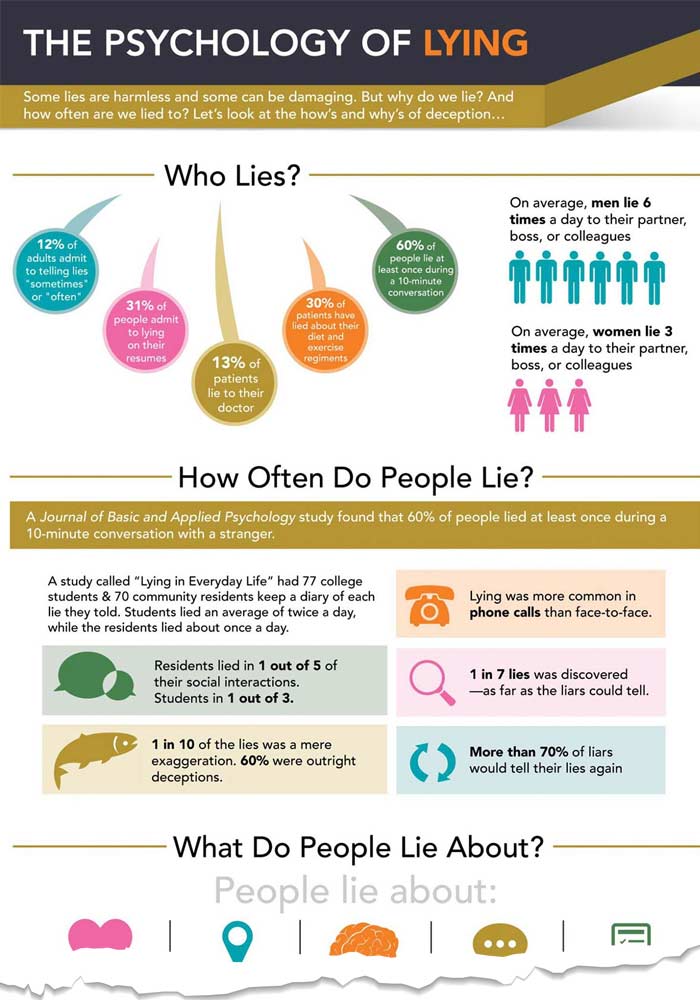 But as evident in any headline-making scandal, lies can be damaging and have been known to ruin marriages, friendships, and careers. Let’s examine the psychology behind lying: who lies, why we lie, and what we lie about.

While 12% of adults admit to lying “sometimes” or “often,” a whopping 31% of people admit to lying on their resumes. These resume fibs can range from listing skills that the candidate has no experience with, to listing companies in work history that they haven’t worked for—a lie that can easily disqualify someone for the job if the hiring company attempts to verify your employment.

Another popular deception is when patients visit their doctor. Thirteen percent of patients lie to their doctor in general, and 30% of patients lie about their diet or exercise regimen. Perhaps the patient feels that their doctor will criticize them for not taking up healthy practices and diet modifications discussed at their last visit to the office.

Men are the dominant liars

Another interesting statistic about lying is the differences between the frequency of lies and the lies told by women and men. On average, men lie six times to their partner, boss, or colleague, while women lie an average of just three times to the same people. The things men and women lie about tend to serve their self-interest or are told to avoid hurting their partners’ feelings.

Men have admitted to lying about their whereabouts (“I’m stuck in traffic” / “I’m on the way”), a partner’s appearance (“No, your butt doesn’t look big in that”), and gifts they’ve received (“It’s just what I’ve always wanted!”). Women also lie about gifts they receive, but also about feeling ill (“I have a headache”) and about finances (“It wasn’t that expensive”). It seems that when a man or woman thinks that the truth will make their partner angry, they lie about what they find to be harmless.

The frequency of fibbing

A Journal of Basic and Applied Psychology study found that 60% of people lied at least once during a 10-minute conversation with a stranger—so perhaps we lie more when talking to someone we don’t know than someone who knows us and might see through our deception. According to psychologist Robert Feldman, the impulse to lie may also have a lot to do with our self-esteem, saying that, “We find that as soon as people feel that their self-esteem is threatened, they immediately begin to lie at higher levels.” Feldman also says that the lies are told in order to maintain social relationships by avoiding offering the unpleasant truths that come with complete honesty. However, people tend to experience more positive outcomes in their romantic relationships when they are honest with their partners and believe that their partner is honest with them. Maybe honesty is the best policy.

Keep a lie journal for a week. Write down every lie you tell, who you told it to, and then, delve into the psychology of why you felt compelled to tell it. After that, if you’re hungry for more psychology knowledge, you can search for a psychology program that fits in with your life!