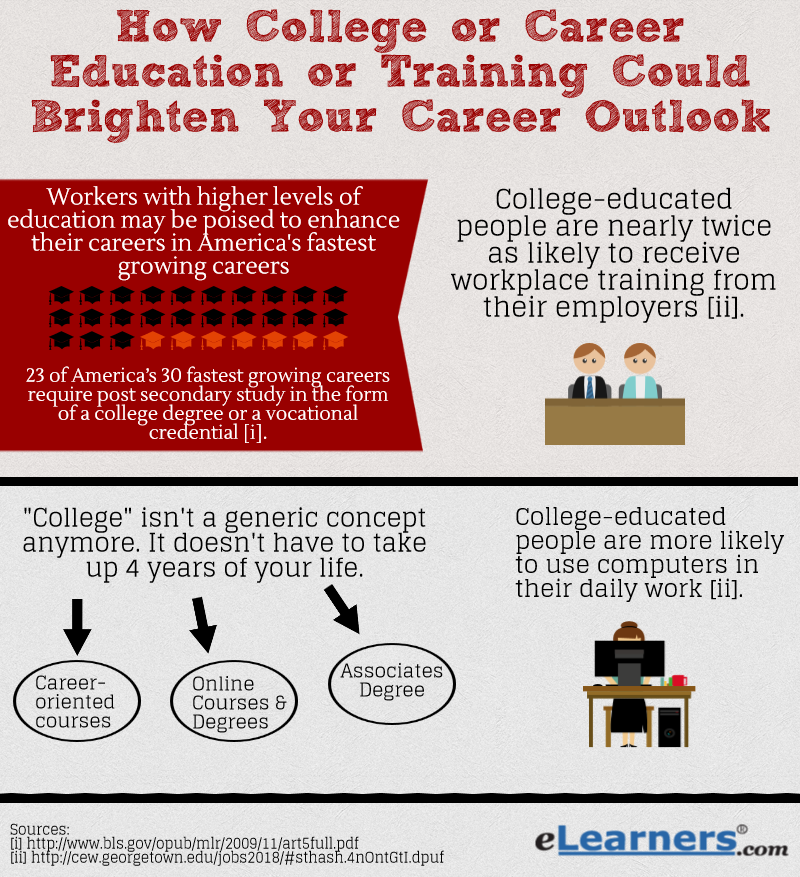 When it comes to job security, how would you rate your current employment situation? Will you still be a valued worker next month? Next year? If you’re less than confident, you’re not alone.

Twenty-three percent of working Americans worry they don’t have enough training or education to remain competitive over the next 2 years. Women, in particular, express doubt about their career paths. This lack of confidence stands out among the key findings from a September 2011 survey, commissioned by eLearners.com

It’s no coincidence that nearly 1 in 4 people struggle with their career outlook. Right now a series of factors are reshaping the job market. All of them bode well for college graduates, and not so well for employees with just a high school education. Consider the following:

In its report, Occupational Employment Projections to 2018, the Bureau of Labor Statistics (BLS) highlights America’s 30 fastest growing careers. Only 7 out of 30 can be obtained through on-the-job training. The other 23 career routes require postsecondary study in the form of a college degree or a vocational credential. Notably, the 7 careers that are attainable for high school grads are all associated with “low” or “very low” median wages. [1]

So what are some of the BLS’ better-paying options? Many of them are healthcare roles – including physician assistant, physical therapist, occupational therapy assistant, and dental hygienist. Not surprisingly, engineers and computer software professionals are included on the list. Meanwhile, some niche service industry positions – athletic trainer, aerobics instructor, and esthetician – will also grow quickly in the coming years.

Higher education used to be a privilege reserved for the very wealthy. In 1940, only 1.5 million Americans went to college, so it was more than common to opt out. Since 1990 however, the U.S. Census Bureau reports that college enrollment has surged from 13.8 million to nearly 20 million – an increase of almost 50 percent. It’s already difficult to compete against younger job applicants, who have fewer financial and family constraints. Competing against better-educated applicants is a double threat. [2]

According to a 2010 report published by Georgetown University’s Center on Education and the Workforce (CEW), college grads are nearly twice as likely to receive formal training from their employers, as compared to high school grads. [3]  If you already have a job, you might not think training from your employer is a noteworthy benefit. But formal training related to an actual job title is what turns professionals into subject experts. Formal training – gained through workshops, conferences, online courses, and other outlets – offers practical, industry-specific knowledge. In addition to experience, formal training adds value to your resume, and sets you apart from the thousands of others who have similar jobs in your field.

The CEW report also notes that workers with more education have greater access to desktop computers and flexible technology. They’re far more likely to use programs and practice skills that enhance their knowledge. Less-educated workers, by contrast, use technology that substitutes for knowledge. Over time, the more educated employees are building competencies they can carry to higher positions – or entirely different fields, while their colleagues remain less adaptable and vulnerable to offshore hiring. [3]

As more Americans – particularly working adults – heed the advice to pursue higher education, schools and colleges are scrambling to accommodate them. More degrees and courses are now offered in asynchronous, online formats. And more programs are designed for career-oriented students, as opposed to traditional bachelor degree students. In other words, you don’t have to read Shakespeare to learn how to perform MRI exams.

Healthcare, for example, is a booming industry with a growing need for skilled graduates of 1 or 2-year technical programs.  Radiologic technicians, physical therapy assistants, and some registered nurses are just a few of the professionals who are entering their fields without necessarily completing bachelor degrees – and they’re not always settling for lower wages.  In early 2011, Harvard’s Graduate School of Education released the paper, Pathways to Prosperity: Meeting the Challenge of Preparing Young Americans for the 21st Century, which points out, “27 percent of people with post-secondary licenses or certificates—credentials short of an associate’s degree—earn more than the average bachelor’s degree recipient.” [4]