The New SAT- College Board Announces SAT Changes for 2016 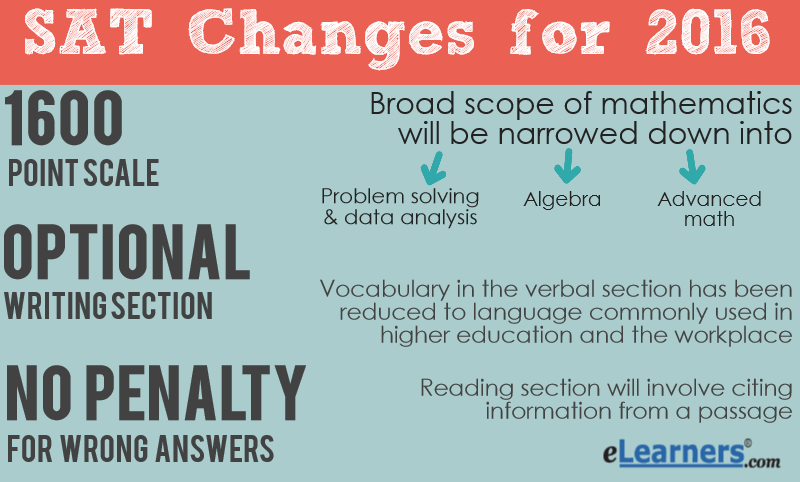 The SAT is an educational institution that helps prepare college-bound students for their lives after high school. Its root function is to serve as a test that seeks to demonstrate how people will fare in their first year of college, and although this fundamental structure has not changed, the College Board, the owner and caretaker of the SAT test, recently announced that the test will look dramatically different in 2016i. The goal of the new version is to make it easier for more students, from a wider range of backgrounds and skill levels, to have an opportunity to excel.

Basic facts about the changes
In 2005, the SAT evolved to include an essay portion. Before this change, the test was relatively straightforwardii - verbal and math were the primary components, assessing a student's ability to define words, perform basic reading comprehension and solve simple equations at the high school level. Both sections added up to a perfect score of 1600, but if you got anywhere near that mark, you were happy. Then, in an effort to bring the test further in line with a college-level education, a writing component was added. This complicated things a little.

Although this new section was largely subjective, allowing you to respond to a prompt without any real need for facts or figures, leading academics questioned the purpose of these skillsiii, suggesting that if a student is being prepared for college, he or she should be given an assignment that requires a synthesis of facts and figures - not just an opinion-based essayiv.

So, in an effort to more accurately show you how you'll do in a collegiate setting, College Board made sweeping changes to the writing portion of the test and tweaked a few elements in the verbal and math sections. For instance, instead of writing a mandatory essay, you'll be given an option and rather than replying to an open-ended prompt, you'll be evaluated on how well you can analyze evidence. Additionally, your score on the reading section will also reflect how well you've understood the materials and whether you've managed to cite information from the given passages.

A closer look at the new version
How will you be scored now? According to the College Board, it should feel really similar to the test before 2005 - with a 1600 scale - but if you decide to take the writing test, you'll be graded separately for that. It doesn't stop there, though. In the new version, the SAT will no longer deduct points for each incorrect answer. Before, you could enter a strategy game with yourself, keeping track of how many questions you knew you got wrong and knowing when you had to actually work a little harder at guessing. Without this pressure, the College Board hopes you'll stick to answering the questions to the best of your abilities.

The content of the two primary sections changed, as well. For example, the broad scope of mathematics will be narrowed down to three primary focal points: problem solving and data analysis, algebra and advanced math. The vocabulary in the verbal section has also been reduced to language that you'll commonly see in higher education and the workplace, such as synthesis and empirical, rather than the relatively obscure words that appeared on previous versions of the test. These changes are engineered to allow you to know specifically what will appear on the test, thus eliminating stress and allowing you to brush up on the knowledge you'll need to do well.

Responses so far
Although the changes have only just been announced, criticisms about the test revisions are already pouring in from all corners of the educational sphere. According to The Huffington Postv, the response has been mixed, with major detractors questioning the validity of the test's ability to actually predict how well you'll do in college - which is its fundamental goal.

"They're taking out difficult vocabulary words," Gary Gruber, author of SAT preparation books, told the source. "You have a word like magnanimous, but there's a strategy - associate it with another word like magnify. That's something you don't want to lose."

On the other hand, Anthony Carnevale, Georgetown University professor, is holding back his skepticism to see how the test will fare once it's live.

"The better the test gets, the more carefully it'll reflect the underlying distribution of income and power in America, and that's a problem," he told the source.

Seppy Basili, vice president of Kaplan Test Prepvi, said in a statement that these revisions are a step in the right direction for making the SAT more accessible for low income families. Additionally, he suggested that the test is now more in line with what it always aimed to be.

"It’s important to keep in mind that SAT scores have always been a measure of whether a student is prepared for college-level work and everyone should have an opportunity to put their best foot forward," Basili said. "Test prep is about knowing the content, having a strategy and developing confidence. Students and their families have long recognized that knowing what’s on an exam and how to prepare for it is critical to succeeding on it."