Pursuing an Online Bachelors Degree in English Literature: An Exposition

All those years ago, you made the call to earn an Online Bachelors Degree in English Literature.

And now, sweat trickles down your forehead, drops onto your black robe, and rolls, inch by inch to the ground. Each bead of salty water reminds you of the sweat and tears you poured into the last four years. (Plus, it’s May, you’re sitting outside, and you’re as hot as a Samsung 7). You look around in anticipation. Hundreds of people surround you, black ants eagerly awaiting word from the queen. Collectively, you’ve scurried around for years now, doing the work and paying the price. It’s time to receive your long-awaited reward.

The queen finishes talking and (finally!) gives her signal. Swoooosh! You joyously pull your regally stringed tassel from one side to the other. It’s final. Graduation is complete. You’ve earned your online bachelors degree in English Literature.

If you’ve ever wondered what it means to truly love someone, you can picture Leo Tolstoy’s wife copying War and Peace nearly seven times by hand. Her dedication helped deliver one of English literature’s most beloved pieces into the world. 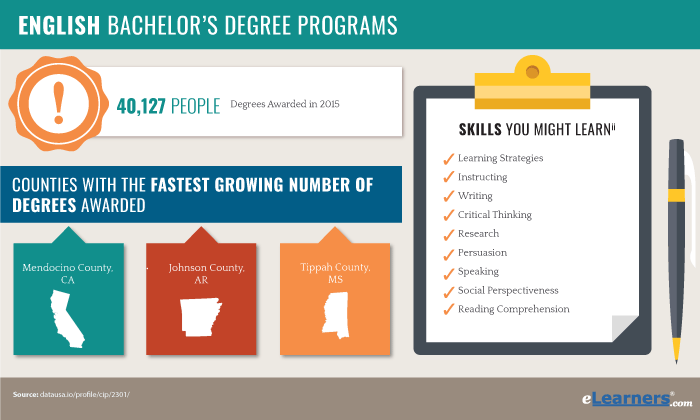 Character Development: Who Will You Be When You Earn an Online Bachelors Degree in English Literature?

So what about after graduation? What will happen? Who will you become? Well, besides becoming a literature and writing connoisseur, you’ll likely develop some other key traits when you pursue an online bachelors degree in English literature. For example, you may become:

Or you might simply apply these amazing skills to your future career.

Some other things you might do, completely independent from your education, to fill your role as English major include:

Stanzas in the Poem: What Must I Do? Let’s Learn by Haiku

But first, a poem…

Every degree has multiple parts.

Different courses to please your heart.

This, after all, is the whole point of college.

So maybe this isn’t the best poem ever written, but it does capture a truth: You can sharpen your knowledge and skills in areas across English by pursuing an online bachelors degree in English literature. What does that entail? Several stanzas, the collection of which will form your poem.

To Illustrate, We Present a Haiku

Balance them with core classes.

What will you study?

Add to your major,

You might also have an option in your major to focus your knowledge in areas of English such as creative writing, literature, literature and psychology, literature and culture, or others. Engaging in your coursework may help you transform into the culturally refined person you’ve always longed to be. Why not pursue an online bachelors degree in English literature?

And Now, Another Poem

To earn a degree,

To see what lurks.

And do your best.

“Colygraphia” means “writer’s block.” If you’ve ever come down with a case of colygraphia, you know it’s a troublesome spot. You need not worry. Zadie Smith took nearly two years to write the first 20 pages of “On Beauty.”

But, if you want to encourage your words to escape your head and land on paper, you might try some of these tricks:

What Will Unfold in the Story of My Life? A Memoir

Once you’ve earned your online bachelors degree in English literature, you could pursue a career in a number of positions. You could:

But There’s No Money in English! Choose Something Practical!

Puh-lease, we say, to those who say nay! Here are some median annual salaries for occupations English majors might pursue:

Kindergarten and Elementary School Teachers: People in this mighty fine group earned a median annual salary of $55,490 in 2016.i

Middle School Teachers: Seeking to influence the pliable minds of our youth, people in this occupation earned a median annual salary of $56,720 in 2016.ii

High School Teachers: This collection of daring souls earned a median annual salary of $58,030 in 2016.iii

Postsecondary Teachers (aka: College Teachers): Wearing tweed jackets with leather elbow patches worn thin by putting their elbows on the table during dinner (tsk, tsk), this group of educators earned a median annual wage of $75,430 in 2016.iv

Reporters, Correspondents, and Broadcast News Analysts: While making a clear and lasting difference for people throughout the world, these dedicated workers earned a median annual wage of $38,870 in 2016.v

Your Mission, Should You Choose to Accept: A Story

Tom read the words slowly, one more time. Was this really happening? Were these cliché words, typed in vintage electrical font, appearing on his computer screen on their own? He rubbed his eyes and looked again. There they were: “Your mission, should you choose to accept…” A box popped up: “Yes or No” it prompted. He nervously hovered over “Yes” and clicked.

The room went dark. A small glow appeared and grew. He heard a slight buzz, one that hissed louder and louder. Looking up, he saw a lightbulb, a now brilliantly bright one, hovering over his head.

I think I’m having an idea! He exclaimed out loud.

What, honey? His mom asked.

Ignoring them, he looked at his screen and saw his future: pursuing an online bachelors degree in English literature.

He looked at the eLearners page in front of him. There they were! Numerous paid programs to peruse and choose from! All he had to do was click. His excitement mounted. He poised his fingers over his mouse. He could taste his future, and it tasted fine.

Do you want to pursue your online bachelors in English? If so, be like Tom and get going! Your future awaits!