The #FOMO Epidemic: Have you caught it?

What if the biggest epidemic of the millennial generation could be resolved simply by turning off your phone? As many as 70% of adult millennials claim they relate to feelings of FOMO, and since this state of mind is often caused by frequent social media and cell phone use, the solution might be easier than you think. But what does FOMO mean, and how can your social media habits possibly lead to feelings of anxiety, loneliness, or dissatisfaction with your life? The first step to getting rid of FOMO is understanding how you got it in the first place!

If you’ve got a nasty case of FOMO, you’re certainly not alone. Nearly 40% of young people report feelings of FOMO “often or sometimes.” But what does FOMO stand for? Added to the Oxford English Dictionary in 2013, this relatively new acronym means Fear of Missing Out. Did you ever worry that your friends were hanging out without you, or that you were the only one not invited to the best party of the season? Have you ever made plans and, when you check your phone, feel that more fun is being had somewhere else? That’s fear of missing out and it can wreak havoc on your self-esteem. 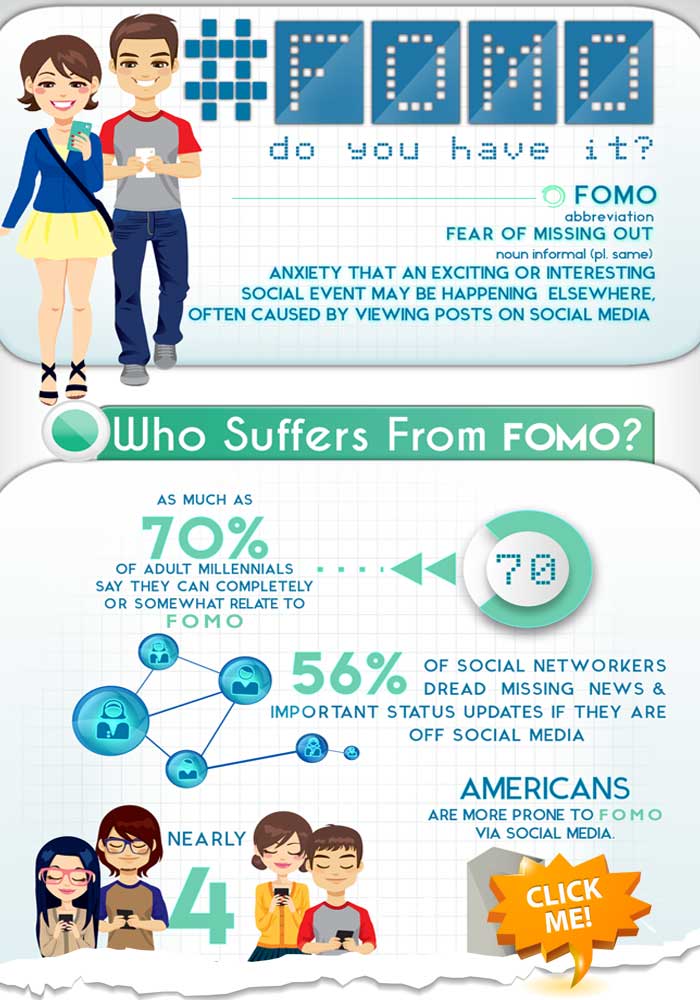 But knowing the FOMO definition doesn’t tell you how these feelings of anxiety came about in the first place. With social media use more prevalent than ever, posts or photos about fun events or get-togethers tend to be the biggest culprit behind this unpleasant mental state. After all, it’s easy to feel bad about your life when your social media feeds are chock full of friends’ party pics, vacation selfies, and inside jokes.

So what causes FOMO?

As hinted above, FOMO is largely connected to, well, connectivity. When you’re constantly checking social media for updates, you’re bound to be overwhelmed by the sheer quantity of pictures, invites, and enviable status updates at your fingertips. In fact, 56% of social media users say they dread missing news and updates if forced to spend time away from their phones or devices. And the amount of time the average person spends on social media in a single day may surprise you: 1.72 hours. With 23% of Facebook users logging in five or more times daily, it’s easy to see how others’ lives can start to seem exciting and more compelling than your own. But think about it—no one posts pics of doing laundry or scrubbing the bathtub, but we all do it!

Social media is not the only offender; obsessively checking emails can be both a cause and a symptom of FOMO. The majority of workers admit they open personal emails at work and work emails at home, instead of compartmentalizing work and home life. About half of workers checked email while on vacation. And 45% of 18 to 34-year-olds admitted to checking email first thing upon waking up in the morning!

Finally, cell phone addiction isn’t helping matters. Forty percent of college students can’t go ten minuteswithout checking their phones, and 67% of Americans check their phones even when they didn’t hear an alert – also known as “phantom vibrations.” Your phone might literally be driving you crazy, particularly when the thought of being without it brings on a serious case of FOMO.

"About a quarter of Generation Xers report feeling FOMO, while 51% claim to at least relate to the fear of missing out."Click to Tweet!

What does FOMO mean for you?

FOMO might be a joke to some, but to others it is a serious cause of dissatisfaction, loneliness, and even exhaustion. Over half of adults claim to be overwhelmed by the amount of information they have to process in order to stay up-to-date, and in the 18-33 age group, 56% of users said they spread themselves too thin to avoid FOMO. And what about all that time devoted to staying on top of news and social media updates? With 37% of workers wasting time at work to check the news, and 14% of workers checking social media on the job, FOMO could have wide-reaching effects on workplace productivity and beyond.

FOMO could even extend to spouses and relationships, since social media offers easy access to “the one who got away.” And according to a survey of British spouses, 1 in 7 claimed to have contemplated divorce due to a partner’s social media behavior, whether that included inappropriate social media use, infidelity, or simply too much time spent online.

Is there a cure for FOMO?