Do You Have the Flu or the Zika Virus?

If you’ve traveled (or are planning to travel) to a place where the Zika virus is found, you might wonder if this virus poses a health risk. Zika virus wasn’t discovered until 1947, and the first human cases were documented in 1952. Though the virus is found all over the world, in places like Africa, Southeast Asia, the Pacific Islands, and Brazil, the disease is usually mild. In fact, carriers may not even know they are sick. So what’s the big deal about Zika, and should you worry about contracting it? Find out, below!

"Because Zika is often mild, most carriers don’t go to the hospital for a diagnosis, and death is rare. In fact, many people never even know they have Zika".Click to Tweet!

In the majority of cases, Zika has no symptoms. When symptoms occur, they are usually relatively mild and include muscle aches, fever, joint pain, rash, headaches, and other symptoms that may be mistaken for the flu. Because Zika is often mild, most carriers don’t go to the hospital for a diagnosis, and death is rare. In fact, many people never even know they have Zika. 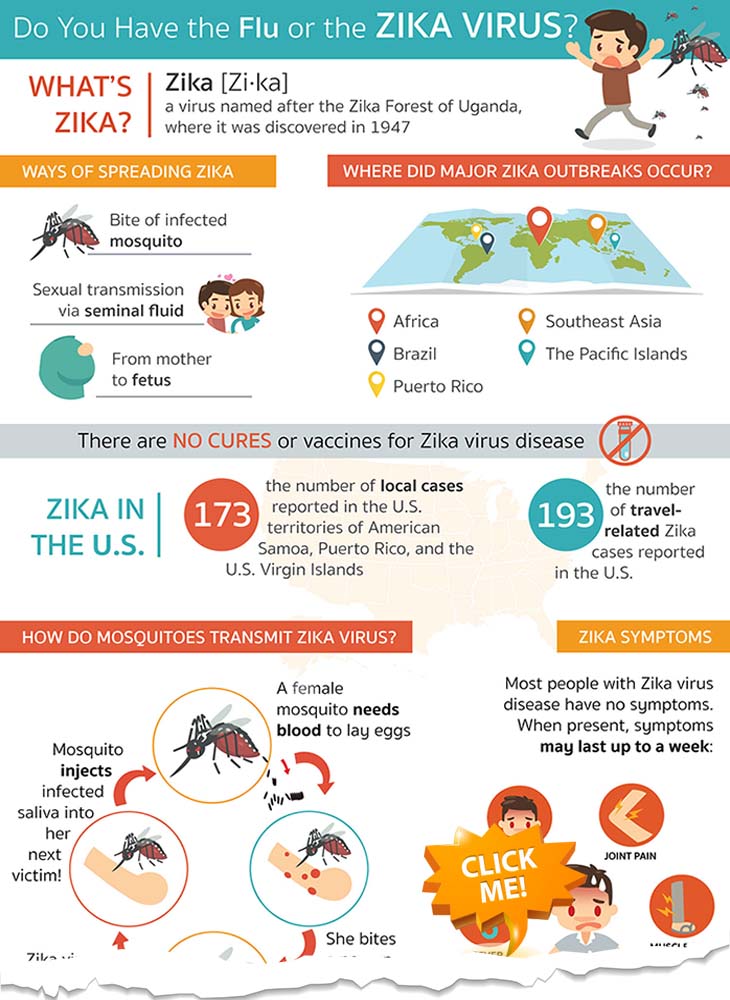 Because Zika can share the symptoms of other diseases, it may be difficult to tell if you have it. The only sure way is to visit a healthcare practitioner, who may order blood tests that can detect Zika and similar viruses like Dengue or Chikungunya. Once diagnosed, there is no cure for Zika other than treatments to relieve symptoms, such as rest, rehydration, and fever-reducing drugs. The good news is that once someone gets Zika virus disease, they are likely protected from becoming infected again. However, it’s important to take precautions to avoid spreading Zika to others, such as through mosquito bites or sexual transmission.

"Not much is known about whether Zika may cause pregnancy complications or birth defects, though possible links are being explored. As of early 2016, there are no reports of infants contracting Zika through breastfeeding.Click to Tweet!

How is the Zika Virus Spread?[iii]

Zika can be transmitted sexually by a man to his partners through seminal fluid. Possible transmission through blood transfusions has also been reported, though these cases are still being investigated. Finally, Zika may be transmitted from mothers to fetuses both during gestation and close to the time of birth. Not much is known about whether Zika may cause pregnancy complications or birth defects, though possible links are being explored. As of early 2016, there are no reports of infants contracting Zika through breastfeeding.

Guillain-Barré Syndrome is a rare disease in which a person’s immune system damages their nerve cells, causing muscle weakness and even paralysis. Brazil has reported increased instances of Guillain-Barré Syndrome occurring along with Zika. While the connection between these diseases is not confirmed, Centers for Disease Control and Prevention (CDC) is working with Brazil to study this possible link.

Though not much is known about the effects of Zika on developing fetuses, recent cases suggest a possible relationship between Zika and microcephaly, a birth defect in which an infant’s head is born much smaller than expected. Microcephaly might mean an infant’s brain has not developed fully, and resulting health problems may include developmental delays, intellectual impairments, seizures, vision or hearing disabilities, and other issues[vi].

Brazil has experienced a major outbreak of Zika virus starting in May 2015, and they have recently begun to report increased cases of infant microcephaly. While the connection between Zika and this birth defect has not been confirmed, research is being conducted to explore this link. Therefore, CDC recommends that pregnant women follow these precautions:

Is Zika in the United States?[vii]

Currently, the only cases of Zika reported in the United States were travel-related. However, local Zika outbreaks have occurred in U.S. territories, with the largest taking place in Puerto Rico. In addition, some experts predict that Zika outbreaks could occur in the U.S., just as an outbreak of Chikungunya virus took place in Florida in 2014. After all, the southern U.S. is home to Aedes aegypti mosquitoes, which may be able to transmit Zika. However, since most Americans live in homes that feature air conditioning, window and door screens, and other ways of keeping mosquitoes out, Zika may be more easily prevented in the U.S.

"Most U.S. residents probably don’t need to worry too much about Zika unless they plan to travel.Click to Tweet!

What is being done about Zika?[viii]

Up until now, not much was known about Zika virus. However, due to the rapid spread of this virus in recent years, as well as possible links between Zika and serious conditions such as microcephaly and Guillain-Barré Syndrome, finding out more has become an international priority! The Center for Disease Control (CDC) activated an Emergency Operations Center (EOC) in January 2016, with the goals of developing lab tests for Zika, monitoring the spread of the virus, researching its links to other diseases, and more. In February 2016, the World Health Organization declared Zika a Public Health Emergency of International Concern, and President Obama requested $1.8 billion in emergency funds to jumpstart research, education, and vaccine development.

In short, Zika is now on the world’s radar. Most U.S. residents probably don’t need to worry too much about Zika unless they plan to travel. However, knowing as much as you can about avoiding this virus – especially if you are pregnant – could help you protect yourself and others!