Obesity in America is reaching epic levels. Why? We love to eat, for one; and everything tastes better when somebody else made it. In fact, 2014 was the first time ever that Americans spent more on eating out than on buying groceries!

Americans Spend More on Food Away from Home in 2014i

Also we don’t just like to eat out, we like it to be fast, cheap, and easy too. There’s still a price to pay, though, especially for teens. Evidence from studies in teens and adults show that weekly fast-food consumption contributes to obesity and weight gain.  Plus, since the 1970s, the number of fast food restaurants in the U.S. has more than doubled,  making access to poor food choices even easier. Additionally, more than 23 million Americans, including 6.5 million children, live in food deserts—areas that are more than a mile away from a supermarket,ii which is why they end up eating more from nearby fast food restaurants or local convenience stores.

The High Cost of Cheap Food

The results? Obesity rates for kids ages 2 to 5 years has doubled from the early 1970s from 5% to 10% in 2007 to 2008. For children ages 12 to 19 years the rate has tripled from 6 to 18%; and it has quadrupled for children ages 6 to 11 years old, from 4% to 20%, which means nearly 1/5 of all young adults 6 to 19 years old are now obese.iii Obesity among children is even a growing threat to national security: 27% of young Americans are too overweight to serve in our military. To break it down, approximately 15,000 potential recruits fail their physicals every year because they are unfit. iii

OK, so clearly I live in a country where many people are obese.  But how do I know if I’m obese? Numbers aside, I think I look pretty darn good, actually.
Click To Tweet! 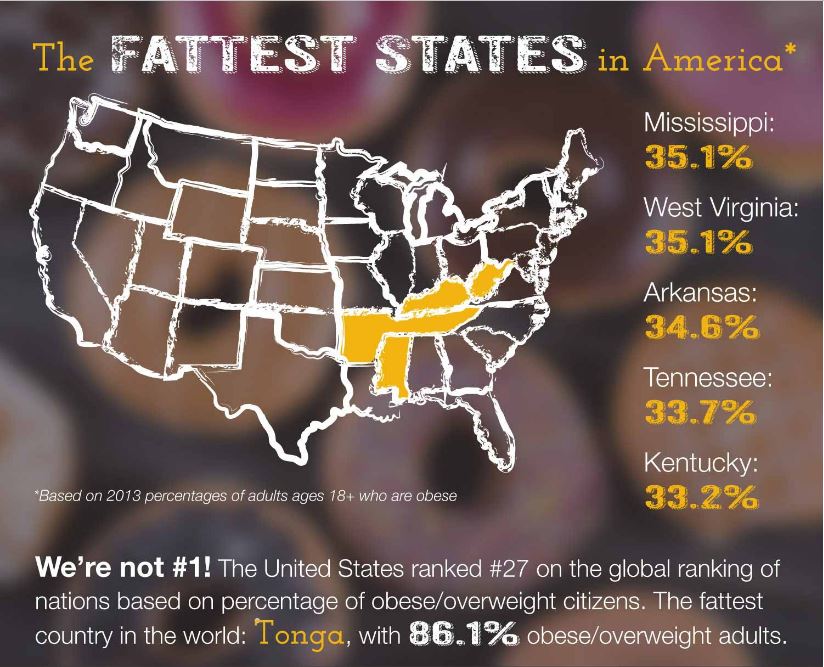 Well, looks are only part of the picture, and according to the CDC website, I’m at risk no matter how hot I look in these jeans. It’s so easy to become obese in America. All it takes is a BMI (Body Mass Index) over 30 -- or if you’re a woman a waist that’s more than 35 inches or a man with a waist more than 40 inches -- to be considered obese. There are obese people like this all around us. In fact, at least one out of three adults in the US! That’s nearly eighty million Americans (78.6). So if you look at the people standing (or more likely sitting) to your right and left, there’s a pretty good chance one of you is obese. It’s even true with kids, with 17% of those ages 2 to 19 obese in the US.

Ok, so what’s the big deal if I’m obese? Big can still be beautiful!
Click To Tweet!

Tightening America’s Belt -  A How To

So, now that you’ve cheered me up with all this, what am I supposed to do about it? It seems like this weight came out of nowhere, like a pound a year at the most. I hardly noticed it! How can I fight to get rid of something I didn’t even notice until you so rudely pointed it out to me?

Help from Your State

Well, the good news is that you don’t have to do it alone.  The world is fighting by your side with new strategies to help people eat healthier and exercise more. Philadelphia, PA, and Berkeley, California, have both passed soda taxes with several other U.S. cities lined up with the same objective including Oakland, San Francisco, and Denver. So, that’s on the local level. On the Federal front, the Department of Agriculture passed new regulations for school lunches, so ketchup and pizza no longer count as vegetables anymore, guys! Hey, it’s progress, and we’ll take it. Meanwhile worldwide, Mexico also passed a sugary drink tax and early data shows some drop in soda drinking among Mexicans as a result. Dubai has a fancypants reward system that gives participants gold for every kilo of weight lost.

But we all know real change starts at home. I gotta do it myself. So what can I do about it right now?
Click To Tweet!

If you reverse all those contributing factors to obesity, drinking your calories, eating out more than in, cutting back fast food and large portion sizes, along with your sedentary lifestyle, you just might see results in the other direction too.

Here’s one place with room for improvement. We have a love affair with sugary drinks. We’re drinking them more as a country even though the evidence that they cause weight gain continues to build. Like refined grains and potatoes, sugary beverages are high in rapidly-digested carbohydrates. Research suggests that when carbs are in liquid form, rather than solid form, they’re not as satiating; people don’t eat less to compensate for the extra calories. These findings on sugary drinks are alarming, given that children and adults are drinking ever-larger quantities of them.

In the U.S., sugared beverages made up about 4 percent of daily calorie intake in the 1970s, but by 2001, represented about 9 percent of calories. The most recent data finds that on any given day, half of Americans consume some type of sugared beverage, 25 percent consume at least 200 calories from sugared drinks, and 5 percent consume at least 567 calories—the equivalent of four cans of sugary soda. One important step is to cut down on these empty calories… NOW!

Sure, and it’s becoming the norm to be overweight in many ways, but the costs of obesity are many and not just about appearance. Being overweight can negatively impact your health, plus creates pricey challenges for society.

The Supersized Costs of Obesity

It’s not just a cost to society at large; obesity can cut into your paycheck too, especially if you’re a woman. The estimated earning gap for obese women relative to those of a “healthy weight” is 6-11.9%. So, given that the median household income in 2014 was a bit over $54K, that could be a difference of over $11,000 a year.

With that much money, you could purchase:

There are also higher medical costs to the order of $1,429 more per year for obese than healthy people. That’s enough money to get two brand-new iPhones every year!

But obesity isn’t just hard on your wallet, it’s hardest on your body. Appearances aside, it can be uncomfortable to carry extra weight around with all that chafing, sweating, and overall discomfort. This could lead to a lower quality of life in general and may even hamper your motivation to get up and move, the key to a healthier way of life.

These are minor challenges, though, compared to what could be truly life-altering consequences for obesity. Sounds dramatic, right? Yes, but coronary artery disease could create some life changes, and 80% of the obese have a higher risk for it. Also, obesity increases the risk of stroke by 64% and those can sometimes be life-altering too. So, now that we’re talking life changes, what about the Big Kahuna—death itself? There are an estimated 300,000 deaths related to obesity in America. every year. Seems like a lot, but it’s because life expectancy for the obese is 6.5 to 13.7 years lower than for those of a “healthy weight.”

So we’re eating better, OK, but for many isn’t obesity also a matter of getting moving? If we’re more sedentary than ever these days, how can we burn off all those Big Macs when all the moves we make are just from the house to the car and the car to work and then back to the car again?

We need to get moving! Only about 1 in 5 (21%) adults meet the 2008 Physical Activity Guidelines. Less than 3 in 10 high school students get at least 60 minutes of physical activity every day. So, if they’re not moving their bodies what are they doing? One thing we know is that if they’re binge-watching TV like I am, it’s not helping their bods any. For every two hours they watch, people have a 23% higher risk of becoming obese (and two hours doesn’t even get you halfway through a TV season... unless it’s British). How about putting a treadmill or stationary bike in the room where you catch up on your favorite shows?

You might also try the following suggestions for weight loss.

Ready to Take the Next Step?

For more information on how to be a healthier American, click here to explore online degree programs in Nutrition and Fitness. Earning your degree in a field such as Nutrition Science or Health and Wellness Coaching could put you on the path to becoming an all-around better, new you!