Are you the right person for an Associates Degree in Law Enfocement? 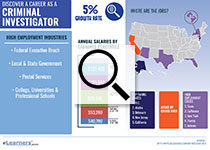 Earning an associates degree in law enforcement is only for people who want to feel like they're making a daily difference in society, there are few fields better suited for them than criminal justice. Whether people are interested in becoming police officers, detectives or security guards, earning an associate's degree in law enforcement, policing and investigation may help them on the path toward those positions.

Law enforcement can be a dangerous and demanding field of work. Officers may put their lives on the line daily to uphold the law, arrest criminals and help citizens through emergencies and disasters.The study of law enforcement, policing and investigation generally focuses on knowledge and skills required to carry out the law.

People of any field may need working knowledge of local, state and federal laws, the operations of the courts and the general proceedings of corrections facilities. Earning an associates degree in law enforcement could provide that knowledge.

Police and detectives are required to have a high school education or a GED in addition graduating from a training academy, according to the U.S. Bureau of Labor Statistics.[i]However, the BLS also notes that some departments and agencies require a college degree or at least some college coursework.[i]As such, an associates degree in law enforcement may qualify individuals for certain kinds of police work, or at the very least, give them an advantage over other people with less education.

Correctional officer, security guard and private detective or investigator are similar to police jobs in that generally a high-school diploma or equivalent certification is enough to meet entry level requirements. However, private investigators generally have years of on-the-job experience in a related field.

Putting your degree to use

Many positions related to the criminal justice field require little education outside of training academy certification. As such, an associates degree in law enforcement may serve as a valuable supplement to training that could better qualify a candidate for higher-ranking positions such as detective. Generally, though, people with an associate's degree may choose to enter the public or the private sphere. In the former are jobs such as police officers, detectives and correctional officers. The latter includes private detectives, investigators and security guards.

An associates degree in law enforcement also may serve as a a starting point for further education and potentially higher paying jobs. For example, probation officers and correctional treatment specialists generally need a bachelor's degree with a focus on social work, psychology and criminal justice, according to the BLS.[ii]

Wages vary significantly for people involved in the field of criminal justice, depending on the work and region involved. However, in terms of annual median wages, police and detectives generally make more than double that of security guards. The BLS provides information on both annual median wages and job outlooks:

While wages fluctuate significantly from one position to another, each of these jobs will see job growth over the next decade.

Each of these jobs generally requires a wide range of skill sets on top of an associates degree in law enforcement. Officers and guards will usually need quick reasoning skills, a strong sense of judgment, the ability to gather information from people and analytical skills to make deductions and draw conclusions about cases. On top of these mental skills, people in these fields often need to rely on their physical strength and stamina to apprehend suspects or criminals.

Dozens of organizations offer associates degree in law enforcement programs in the field of criminal justice. generally, these classes focus on the workings of the justice system and how it applies to everyday police work. Some degrees may have certain focuses, whether on criminology or behavioral sciences.