Healthcare makes headlines, but what difference does it make in my life? It's more like a political ping pong ball buzzword these days.

Healthcare can sometimes seem like just a talking point, but it affects us all. In life there are two certainties you can count on: death and taxes. We're all going to die someday, and everybody pays taxes. Healthcare hits us on both counts. In fact, death and taxes make a great analogy for how healthcare works in our lives. There's the personal and individual side, death. This idea is about an individual and their healthcare. We all go to the doctor or emergency room as individuals and have an experience—one significant aspect of healthcare. But the broader and more talked about part of healthcare is the industry. Much like taxes, this aspect of healthcare is impersonal and about business. Still, it affects all of us just as taxes do.

OK, I get the individual impact but how does healthcare as an industry affect me?

Just as government tax policies taxes have results for individuals, healthcare costs and quality result from corporate and government practices. No matter how you look at US healthcare costs, though, one sure conclusion can be drawn: We are big spenders. The biggest. If you look at the overall picture, the US spends more than any other country at a whopping $3.2 trillion in 2015. Even when you break costs down to spending per person, the answer is the same. Healthcare spending per capita in America was $9,403, way more than the $5,411 in Germany, or $5,292 per Canadian. Meanwhile, costs are even less in the U.K. and Japan with only $4,000 spent per individual in those countries. Not only do we have the big pockets, but get out your big foam #1 fingers because we're also world leaders in healthcare dollars’ year after year. 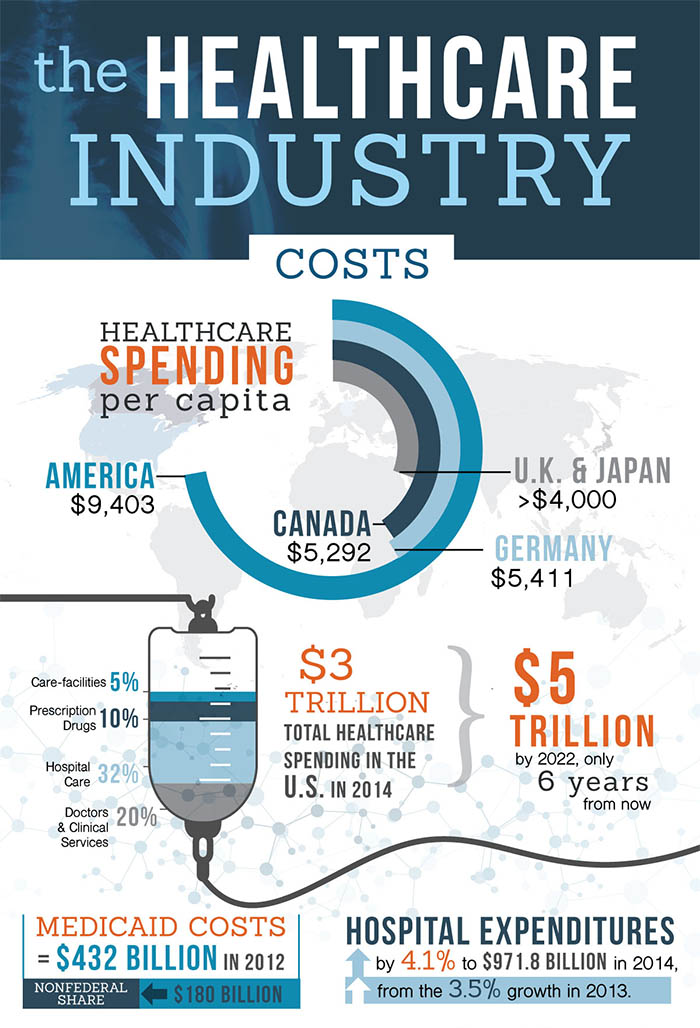 So, how is all this money spent? Where does it go?

Some 20% of healthcare spending goes to doctors and clinical services, 32% on hospital care, 10% dedicated to prescription drugs, and 5% for care-facilities. It's estimated that the total will grow to $5 trillion by 2022, only five years from now. Another big chunk of U.S. healthcare spending goes toward Medicaid. For instance,in 2015, Medicaid costs totaled $530 billion.

Not only are all these dollar numbers increasing but the rate of our spending also continues to rise year over year. Hospital expenditures increased by 4.1% to $971.8 billion in 2014, up from the 3.5% growth in 2013.

Dollar signs are sky high but what are some other measures of healthcare impact?

Of course, financial costs are significant but time and quality also make a big difference in our lives. Money isn’t only measured in dollars. Your time is money too. The average amount of time patients spent in the emergency department before being admitted to the hospital as an inpatient is 274 minutes, according to HHS Hospital Compare data.

There's also the relative health impact on individuals and even the big kahuna . . . death. How we die as a society says a lot about us. The leading causes of death in the U.S. in 2014 included: heart disease (614,348 deaths), cancer (591,699), strokes (133,103), diabetes, (76,488) and suicide (42,773). These conditions seem to point to a stressed culture, so all that spending doesn’t seem to help alleviate this aspect of the American way. Speaking of conditions, when we have our ills treated in an emergency room the costs can be quite different but they're all stressing out our wallets.

Pulling all that data together, researchers found that the average charge for an emergency room trip for all these conditions, $1,233, is 40% higher than the average American rent right now, which is $871 per month

So, what can I do if I need to see a doctor immediately?

Fortunately, there are alternatives for pressing but non-emergency health conditions. Urgent care centers or clinics offer the same services and almost always at a lower cost point.

Not everybody needs an emergency room or urgent care center but we all have a yearly doctor checkup. The average price of a new uninsured patient doctor's office appointment in 2013 was $160, with some variation among states (a low of $128 in Pennsylvania and a high of $188 in Oregon). But it's not all quite so bleak. The price ran lower at federally qualified health centers ($109). Prices were also lower for doctor offices in ZIP codes with higher poverty rates. Also, the average out of pocket cost for privately insured patients in these same states in 2013 was $49. So, when it comes to doctor appointments there are ways to save.

That's certainly the purpose of insurance in our lives—or at least that's the sales pitch. However, on the industry level it's a complex story that intertwines government mandates with individual healthcare. For instance, President Obama's health care reform law, commonly called ObamaCare but officially called the Patient Protection and Affordable Care Act (PPACA) or Affordable Care Act (ACA) for short. Signed into law on March 23, 2010, enrollment in the program began October 2013. Approximately 8 million enrolled in PPACA that first term. Nearly 23 million people were enrolled in ACA as of January 2017, with 85% receiving financial assistance to pay for their insurance. Thus, as a direct result of the passage of the Affordable Care Act, we've had the largest reduction in the uninsured in four decades. That mean an estimated 20 million uninsured Americans gained health coverage. 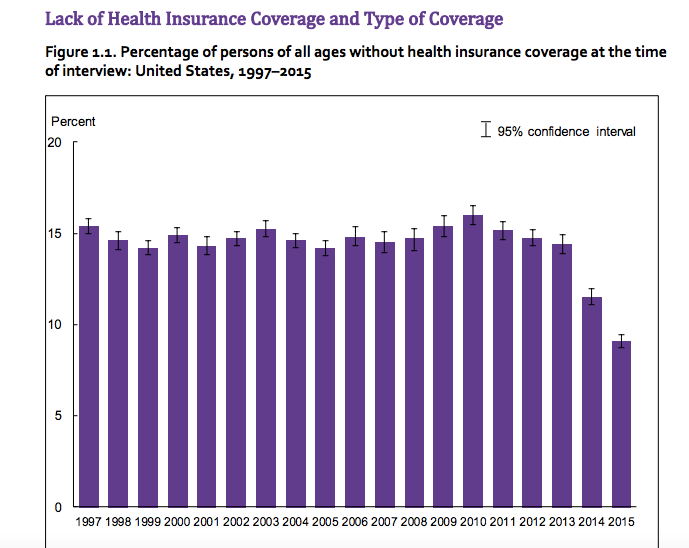 This result stems from both the diverse ACA provider offering and its mandate that Americans without some form of health insurance must pay a fine of about $700 per year.

The average costs of company-sponsored insurance plans in North America were expected to rise 6.5% in 2016, 2 points less than 2015 because some 10 million Americans gained insurance coverage under PPACA, sharing the cost burden.

Increased insurance also doesn’t seem to be helping all Americans on the individual level yet. According to 2015 data, 26% of adults aged 18 to 64 reported trouble paying medical bills. The group included both insured and uninsured, with fully 20% of insured folks having trouble and 53% for the uninsured.

“Statistics from the U.S. Department of Health & Human Services show that 20% percent of a given population accounts for 80 percent of total healthcare expenditures. It’s such a very small population accounting for those high healthcare claims. Given this information, it’s important for employer-sponsored healthcare plans to have programs in place to work with employees with high health risks and chronic conditions because the data shows that when workers move out of the high-risk categories, others are already moving in.”

Ok, we're spending a ton but the quality must be amazing - right?

You'd think with the trillions our country spends on healthcare, it would be the highest quality. But death and taxes aren't the only certainties in life, there's also that old chestnut "nobody's perfect". Truth is that although innovations abound, doctors are still human beings and thus, mistakes are made. Every year, approximately one in 20 Americans, or about 12 million people, receiving outpatient care are misdiagnosed. 78% of hospitals have evidence of unnecessary antibiotics administered for two or more days, resulting in potentially avoidable healthcare costs of nearly $13 million.

"One surprising healthcare fact is that there will be a huge demand for new nurses over the next 10 years, with over 1 million vacancies expected to open up by 2024 according to the Bureau of Labor Statistics. The American Nursing Association says that 1M of the 2.7M registered nurses (RN) are currently over the age of 50. Demand for nursing services is rising as the population ages and lives longer with more chronic conditions. The American system must find a way to bridge this shortfall or it will be forced to make compromises: either higher cost or decreased quality of care."

There are no easy answers when it comes to healthcare on the industry level. But if you move your body and eat your veggies you'll make a difference on the individual level. Progress has to start somewhere. Why not with you and me?

“The good news is that we know we can lower health risks back to normal ranges through healthy eating habits, exercise and smoking cessation. It’s incredible how quickly high-risk patients can become healthy once they commit to making lifestyle changes.”