FBI agents keep a lot of secrets, even when they’ve moved on to new careers. Though Jon Tasch is no longer an FBI Counterterrorism Agent, there are many aspects of his work that he can never share with family and friends. What he can reveal is that he played in integral role in investigating issues of national security, including the actions of terrorist groups like al Qaeda. He can also attest that shows like Homeland, while entertaining, don’t tell the whole story of the FBI’s role in combatting terrorism. There’s so much more to this challenging and complex field, as Tasch knows from his years with the Bureau.

Tasch began his career as a Naval Flight Officer, rising to the rank of mission commander and receiving a Presidential Air Medal. He earned a Bachelor of Science degree from the U.S. Naval Academy and later went on to earn his M.A. in Homeland Security from Johns Hopkins University’s School of Government. Tasch then served as an FBI Special Agent for five years, earning a Certificate of Achievement from FBI Director James Comey.

Today, Tasch serves as a coach and speaker, inspiring today’s college students to become the leaders of tomorrow. You can learn more about him on his website- JonTasch.com. Read on to learn what it takes to launch a successful Homeland Security career, as well as Tasch’s opinion on why it’s rare to see FBI agents in their early twenties (attention, older students!).

eLearners: Tell us more about your education and military background.  How did your experience lead you to a role in the FBI’s counterterrorism division for five years?

During a portion of my time as a naval officer, I was assigned to the Washington, D.C. area.  I attended Johns Hopkins University’s School of Government, where I concentrated in Homeland Security studies.  My coursework focused on terrorism, intelligence, and Islam.  I was able to write my thesis on jihadi Islamism, so I became well versed in this aspect of the religion.  I believe that my military background and my postgraduate work made me an appealing candidate for the FBI.

eLearners: What was your official job title during your time at the FBI?  Can you tell us more about your responsibilities in that role?

My title was FBI Special Agent.  I was assigned to the San Francisco Field Office.

I was tasked to investigate potential violations of U.S. National Security, specifically those concerning international terrorism.  I investigated groups like Hamas, Hizballah [a.k.a. Hezbollah], and al Qaeda.  The FBI has a number of approved investigative techniques, and it is important to understand that the least intrusive techniques were always utilized before more intrusive ones.  I developed sources, conducted surveillances, and obtained records via subpoena which required a court order.  During my time in the FBI, I conducted hundreds of interviews.  Many things I did are classified and unfortunately I’m not able to talk about them.  That is the nature of conducting classified operations—much of what you do you cannot share with your friends or family.

As an FBI Agent, you have a lot of autonomy.  It is on you to stay busy.  If you are sitting at your desk waiting for things to come to you, you are no good to the Bureau.  It is imperative to be proactive.

I also worked closely with other law enforcement partners from agencies that include ICE, Customs and Border Protection, the Department of State, the San Francisco Police Department, and the California Highway Patrol.

eLearners: Take us through a typical day or week as a homeland security agent.   What are the similarities and differences between your actual responsibilities and the way counterterrorism jobs are portrayed in TV shows like Homeland?

The biggest difference between Hollywood and reality is that the justice system is much slower than how it is portrayed on television.  Because those who are under investigation will have their lives pried into a bit, there is a great deal of oversight from above.  Many of the things an agent wants to do must be approved by many levels of bureaucracy.  There is also lots of paperwork, because everything you do must be well documented.  That said, there is a lot of job satisfaction as well.  Other than being a pro athlete or jet pilot, I can’t imagine a cooler job.

Also, the turf battles that are depicted on television are rare in the real world.  The FBI cooperates very well with most agencies, because it is crucial to have a good relationship with the state and local police in order to be effective at combating terrorism. The concept of the Joint Terrorism Task Force ensures that law enforcement agencies cooperate and share information with one another.  This is mostly as a result of the 9/11 Commission findings.

eLearners: Do you feel that the news media is accurate in its portrayal of homeland security activities and the intelligence community? 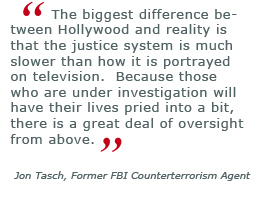 I think it’s important to consider that the news media is in the ratings business, and, as such, has an obligation to make the news partially entertaining and hype things up.  I get it.

It’s when the analysis turns to judgment that I take issue.  On the one hand, the media wants the U.S. Government to respect civil liberties and throttle back on its collection activities, but if an attack occurs the media blame law enforcement for not being more proactive.  It’s the nature of the business I guess.

eLearners: Can you name some TV shows or movies that provide inaccurate representations of counterterrorism efforts?

Homeland is the most inaccurate that I’ve seen, though I find it the most entertaining and have watched every single episode.  Homeland grossly misrepresents the CIA’s role within the U.S.  The FBI is the lead counterterrorism agency in the U.S., and as such, it calls the shots.  The CIA has a severely limited role within the U.S. and there is no rogue activity that is portrayed on the show.

eLearners: Films, TV shows and the news often glamorize jobs in government intelligence.  Do you feel this has a negative impact on students who may be attracted to these careers under false pretenses?

I think most people are mindful that there is a great deal of sensationalism depicted in the movies and TV.  I would caution people, however, that there may be instances when you won’t be allowed to do something because of politics or lack of funding.  You never see that kind of stuff in the movies or on television.  You have to realize that you are an employee of the U.S. Government and at the end of the day, your job is funded by the taxpayer.

eLearners: Which types of students do you feel are ideal for jobs in Homeland Security?  Which skills and attributes contribute most to a successful career in the field?

Critical thinking and sound judgment are the hallmarks of a good investigator. Not only do you have to “put the pieces together” during an investigation, but you may be called into harms way.  Those situations require sound judgment and quick reaction time. Above all, a good homeland security agent will be a well-rounded individual with some demonstrated life experience.  It is rare to see many agents in their early twenties in the homeland security field. There is so much competition that these agencies have the luxury of hiring folks who are bit more experienced.  In the FBI, for example, there are many former accountants and attorneys, as well as a good number of former police officers and military veterans, both from the officer and enlisted corps.

There are many jobs in the Homeland Security field, though.  Agencies like ICE, Customs and Border Protection, and the Air Marshals (TSA) hire younger applicants than say the FBI or CIA.

eLearners: What advice do you have for students pursuing Homeland Security courses of study?  What are the realities of pursuing a career in counterterrorism, and how can students prepare themselves for the challenges?

I would advise against pursuing a homeland security degree as an undergraduate if you are interested in going the FBI or CIA route.  In the FBI, new Agents are about age 30, so the Bureau is looking for a vast array of life experiences.  I think that an advanced degree in security studies is more appropriate for those interested in a Homeland Security career.  That said, there are certainly other agencies who tend to hire younger employees, so that may be worth considering if someone was looking to transition into that type of career sooner.