The U.S. Department of Homeland Security (DHS) was founded in 2002 by combining 22 federal departments in the name of protecting the land borders, sea ports, and air space of the United States and its citizens. The 240,000 citizens that the Department of Homeland Security employs worldwide all work toward the goal of securing the United States and preserve national freedoms. Other government agencies, such as the Central Intelligence Agency (CIA) and the U.S. Department of State’s Bureau of Diplomatic Security, are affiliated with the DHS and have aspects of their jobs that also relate to the defense of the country.[i] [ii] 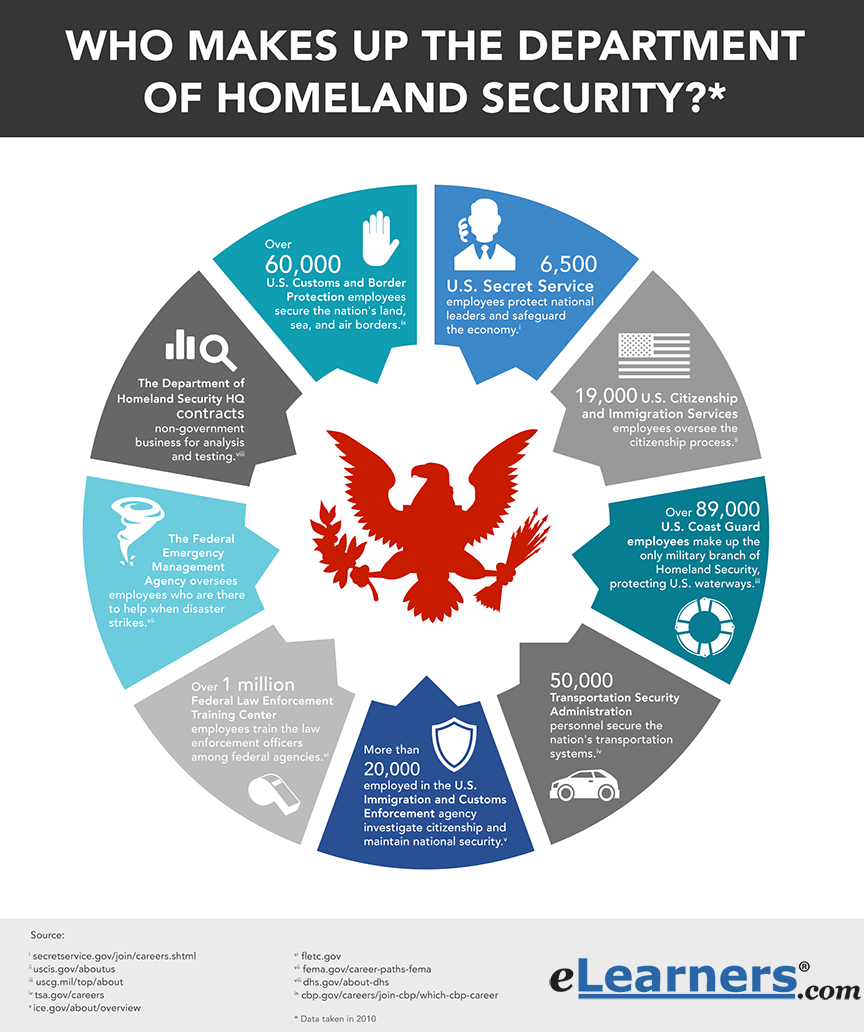 The largest agency of all the DHS components, the Customs and Border Protection agency deals with securing and monitoring the U.S. land borders. The CBP employs over 60,000 people in roles such as border patrol agent, agriculture specialist, and customs officer. A border patrol agent may be tasked with keeping people out of the country who do not have a legal right to enter, as well as stop any dangerous objects—such as weapons—from being brought into the country.

Among other responsibilities, this department contracts small businesses that do their part to achieve the many goals that allow homeland security to run as smoothly as possible. Non-federal businesses can apply to become federal contractors and perform jobs for the Department of Homeland Security, such as statistical analysis or laboratory testing.

FEMA’s purpose is to support U.S. citizens by responding, recovering, and rebuilding when disaster strikes. FEMA employs a mix of intermittent, permanent, and on-call response/recovery employees due to the sudden nature of disasters. Permanent full-time employees are required to go through an application and interview process, as well as other required steps of federal employment. One example of a position at FEMA is a Supervisory Emergency Management Specialist, who provides instruction and guidance to state and local governments in the event of a disaster.

The FLETC is an inter-agency component of the DHS that trains federal employees in law enforcement, some of whom will go on ensure homeland security. Since it was formed in 1970, FLETC has provided training to more than 1 million agents and law enforcement officers for the United States. A Counter-Terrorism Instructor might be in charge of training individuals in the detection and prevention of terrorist activity, as well as in other elements of anti-terrorism and officer safety and survival.

The U.S. Immigration and Customs Enforcement component is considered the major investigative branch of the DHS. Founded in 2003, ICE is the merged result of the investigation and enforcement elements of the U.S. Customs Service and the Immigration and Naturalization Service, employing over 20,000 people with the responsibility of maintaining homeland security and public safety.

The Transportation Security Administration secures the nation’s transportation systems and consists of the people who screen passengers and conduct intelligence gathering and analysis on the traveling passengers. Federal air marshals, federal flight deck officers, and inspectors are some of the 50,000 positions employed by the TSA.

The U.S. Coast Guard is the only component of the DHS that is also part of the U.S. military and has been guarding U.S. waters against unauthorized entrance since 1790. In 2012, the USCG employed 89,800 citizens, including 43,000 active members, 8,000 reservists, over 8,800 civilian employees, and over 30,000 volunteers. Because of the military nature of this branch, entering the field as an officer includes different regulations than many other components of the DHS.

For anyone applying for citizenship in the U.S., the Citizenship and Immigration Service oversees that process. The USCIS’s 19,000 employees also provide information about granting citizenship, explain citizen benefits, promote understanding and awareness about the citizenship process, and strengthen the security of the immigration system.

The Secret Service is charged with the task of protecting the nation’s leaders and securing the nation’s economy by safeguarding financial infrastructure and payment systems. Established in 1865, the secret service employs about 3,200 special agents, 1,300 uniformed division officers, and over 2,000 administrative, professional, and technical support personnel. Special agent positions often require extensive travel and reassignment, long hours, and possible undercover work.

This content is provided for informational purposes only, and does not imply any endorsement or approval from any government agency or entity.