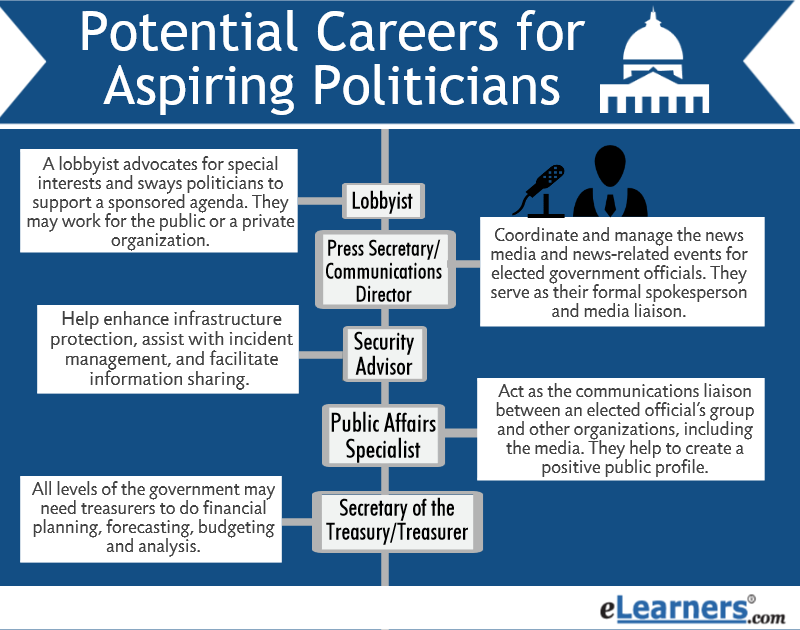 Perhaps you have high hopes to serve as the next President of the United States…or maybe you just want to join the political world. Check out these five careers that could put you in politics without having Secret Service with you 24/7.

Protective Security Advisors could offer another option for someone interested in the field of security. According to the Department of Homeland Security website, Protective Security Advisors serve as “trained critical infrastructure protection and vulnerability mitigation subject matter experts.”[ii] These advisors help the United States in three main areas: enhancing infrastructure protection, assisting with incident management, and facilitating information sharing.

A bachelor’s degree in homeland security could help you get into a field like this. This type of degree gives training and education on how to plan, implement, and manage an organization’s security operations. With a homeland security degree, coursework could also prepare students for positions in emergency management, information security management, or law enforcement.

A Press Secretary, also known as a Communications Director, coordinates and manages the news media and news-related events for elected government officials. Elected officials at different levels of government—including federal, state, and even some local departments—may employ press secretaries. A Press Secretary serves as the formal spokesperson and media liaison for the elected official. Job duties could include receiving media requests, outputting press releases, pitching news stories, and conducting press conferences.The Press Secretary could receive questions on legislative and non-legislative topics, so he should stay current on all issues related to the elected official’s agenda.

A bachelor’s degree in journalism could help you pursue roles in public relations or communications, which are common starting points for appointed secretaries. A journalism degree typically involves coursework in writing, editing, interviewing, researching, and ethics. Depending on where you study, your coursework could include public relations courses that could help with this type of job. In addition to preparing you for a Press Secretary career, a journalism degree could also prepare you for careers like a copywriter, copy editor, grant writer, professional blogger, or even a freelancer.

Do you feel strongly enough about a subject that you could fight for it every day? A lobbyist’s responsibilities include advocating for special interests and swaying politicians to support a sponsored agenda. Lobbyists could work for the public, a private organization, or a large corporation, and should have strong persuasion skills. They also need to know how to tailor specific topics to whomever the audience is—Baby Boomers, Republicans, Northerners, Democrats, Westerners, college students, etc.  A lobbyist should be self-confident, well-informed, and sociable…and a little bit of personal charisma doesn’t hurt here, either.

A bachelor’s degree in political science could help you break into a lobbyist career. In this type of degree program, expect to learn tools, techniques, and challenges of the public and nonprofit sectors. You could also learn about policy development, which could help out when determining how to lobby for your next special interest. This type of degree may also prepare you for careers like a political analyst, political consultant, or banker; or could lay the groundwork if you are interested in pursuing law school.

Do numbers, budgets, analyzing, forecasting, and financial planning sound like things that could interest you? All levels of the government—local, state, and federal—need treasurers, with the highest treasurer in the government being the Secretary of the Treasury for the United States of America. According to the U.S. Department of the Treasury website, “The Secretary of the Treasury is responsible for formulating and recommending domestic and international financial, economic, and tax policy, participating in the formulation of broad fiscal policies that have general significance for the economy, and managing the public debt. The Secretary oversees the activities of the Treasury Department in carrying out his major law enforcement responsibilities; in serving as the financial agent for the U.S. Government; and in manufacturing coins and currency.”[iii]

A bachelor’s degree in finance or economics could be a good start for students hoping to work as government treasurers. In this type of degree, course study may also prepare students for positions in corporate finance, banking, insurance, and investment companies.