The Importance of Ethical Leadership

A reputation that’s taken years to build can be decimated in a matter of minutes – just ask Bernie Madoff, the former executives at Enron, or the many other business leaders who abandoned moral high ground in exchange for bigger profits.

That’s why Paul Dillon, President and CEO of Dillon Consulting Services LLC, has always advised business clients to do the right thing. A Certified Management Consultant with extensive experience in many different sectors, including for-profit business, government, academia and not-for-profits, Dillon’s code of ethics have been heavily shaped by one period of his life in particular: his time serving in the military during the Vietnam War.

With two Bronze Star Medals for action with the U.S. Army’s 1st Aviation Brigade in Vietnam, Dillon has been able to apply the same leadership skills and moral principles he learned on the battlefield to the problems we face in the business world today.  In addition to serving in the military and owning a consulting firm, Dillon has written about everything from aviation and venture capital for Commerce magazine to the concept of trust in business for American Express OPEN Forum.  He’s also contributed to dozens of other publications and websites, including Crain’s Chicago Business, The Wall Street Journal, About.com, and USAA magazine.

He has a long history of providing guest commentaries on business and political issues for WBBM-AM Newsradio 780, a division of CBS Radio, and also recently presented at the 2013 Sales Association Midwest Fall Conference, where he spoke about the importance of companies putting integrity first when dealing with potential clients.

Read on to find out why Dillon urges business leaders to do the right thing at all costs, and why in the age of social media and internet news it’s even more important to put ethical leadership and transparency ahead of profits.

eLearners: Describe your responsibilities as President and CEO of Dillon Consulting Services.

PD: Dillon Consulting Services LLC is a sole proprietorship. (I am its only employee). The firm provides project management and business development services for clients in the service industry. I also serve as a consultant to Crain's Chicago Business, and was the primary researcher for the "Veterans in the Workplace" Focus section (Nov. 2011), in addition to other initiatives for this publication. I was the creator of the concept for a veteran start-up incubator in Chicago.

I have never had any moral or ethical leadership issues with the work that I do because I simply will not take any assignment that doesn’t adhere to the highest ethical and moral standards, and that I cannot do well.

Money has never been the driving force in this business. Doing high quality and interesting work that satisfies the client and, hopefully, contributes to the greater good has always been the primary motivation for my firm.

eLearners: What are the most important ethical and moral principles a company can adhere to?

PD: The most important thing is for companies to do the right thing, as you see it, even in the face of a world that often wants us to “go with the flow” or “to get along, go along.” But, doing the right thing is often very hard to do. This is particularly true in today's global business environment that has few well-defined and universally agreed upon rules. And, as noted in a recent Royal Bank of Canada newsletter on this topic, “The fewer the rules, the greater the need to make one's own rules for the sake of self-preservation. Not only to make them, but to live by them—and, it is always tougher to abide by self-imposed rules than by those imposed from above.”

The potential costs for a company that doesn't adhere to the highest moral or ethical leadership  standards is not only the possible loss of customers, but, just as devastating, the loss of the company's reputation. As Warren Buffet once famously said, “It takes 20 years to build a reputation and five minutes to ruin it. If you think about that, you'll do things differently.” (The origin of this quote is sometimes attributed to Will Rogers: “It takes a lifetime to build a good reputation, but you can lose it in a minute.”).

You get the idea.

eLearners:  Have you faced any major ethical leadership problems in your career? 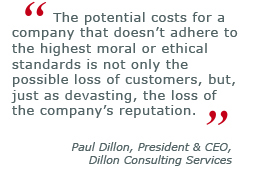 PD: Everyone in business has been faced with at least one ethical dilemma during the course of their careers. But, I was raised by my parents, educated by the Jesuits, and trained by the Army to have the highest ethical standards. If it doesn't look right, taste right, smell right – it probably isn't right – and, don't even think about doing it. Don't sell your dignity – or your soul – for money. Life is too short. Sleeping well at night is a wonderful commodity.

eLearners: Has your experience in the military influenced your business philosophy in any way?

PD: I always have thought that the best ethical leadership training in the world was the training that is taught to commissioned officers in the Armed Forces of the United States. As young Army officers, we were taught to take care of our troops first, if you want them to follow you. An officer has to convince the people under his or her command that they have their best interests in mind, while they are accomplishing the mission. An officer doesn’t eat until all of his or her troops have eaten. An officer is the last to sleep, and walks the perimeter of the camp to ensure that their troops are safe and sound. An officer doesn’t change into a dry pair of socks, until he or she is satisfied that their troops are dry and warm. Otherwise, the troops just aren’t going to follow you to places where they wouldn’t go by themselves.

And, that's the best definition of ethical leadership that I have ever encountered. A leader is someone who people will follow to a place where they wouldn't go by themselves. The United States Army has more than 200 years of experience in training leaders. And, some of us got to test out that training on the battlefields of Vietnam—and, carry those lessons with us into our business careers.

“Duty, Honor, Country” – the motto of an Army officer. Simple words – but, their meaning can have a profound impact on a business career.

eLearners: Have you seen more companies starting to place a greater emphasis on moral and ethical responsibility?

PD: More and more companies say that they are placing on emphasis on moral and ethical responsibilities these days. But, whether they are actually walking the talk is another matter. That isn't for me to decide, or even opine on, for that matter.

Integrity is everything. As I wrote recently in an article on this subject, “It is by having integrity that we can reinforce our moral courage to do the right thing, even in the face of overwhelming opposition, or even ostracism, from our social or business milieu. 'By integrity,' said management guru Warren G. Bennis, 'I mean those standards of moral and intellectual honesty on which we base our conduct and from which we cannot swerve without cheapening our better selves.' ”

Without unquestioned integrity, you really can't operate long term in the business world. People won't believe anything you say or do.

eLearners: In terms of moral and ethical responsibility, what are some of the biggest changes you’ve witnessed in the business world over the years? Has a lot of this change been fueled by social media and increased visibility?

PD: Certainly, the advent of social media has dramatically increased transparency in all manner of business operations. Issues of unethical or immoral behavior in the business world are exposed in real time, and instantly transmitted around the world.

There are no more secrets.  As one of my former mentors once told me, “Remember that when you go to make a mistake!”

eLearners: What advice do you have for business students who want to pursue profitable yet ethical ventures? Is it hard to strike a balance between the two?

PD: You are going to find yourself placed in situations where doing the right thing puts the interests of your business and, consequently, your own personal interests, at stake. The choice is simple: Either you do the right thing, or you don't. Often, no one is the wiser. It is merely a matter of being able to look at yourself unflinchingly in a mirror, and hopefully, having the peace of mind that comes from that.

And, what you will find is that peace of mind will lead to long term profitable business practices that will help you immensely in your business career.

eLearners: Is there anything else you would like to share that you feel would be valuable to students who are considering studying business or finance?

PD: Yes. I am firmly convinced that the psychological damage that we inflict on ourselves when we act in unethical ways, or when we are unjust to others in our business or personal lives, affects us physically in dramatic, yet in unseen ways. Doing the right thing – even when it is excruciatingly difficult to do so, and even when the world is demanding us to just go along – is as important to leading a long and fruitful life, as it is to ensuring a long term successful business career.

I also believe that all of the positions that I have been fortunate to hold in my career, whether in the military, government, academia, business, or the non-profit world, have played a significant role in where I am today. What is interesting is that all of these various positions have reinforced one another. For instance, the leadership roles that I've had with non-profits has made me a better businessman, while having practical real-world business experience made me a better teacher. The same with teaching and writing. And, I have been able to draw upon my military and government experience in both my business and eleemosynary endeavors. A wide range of experience enables you to draw upon the best that each experience has to offer, making you better in whatever you do.

Here's to your piece of mind and to your successful business career!